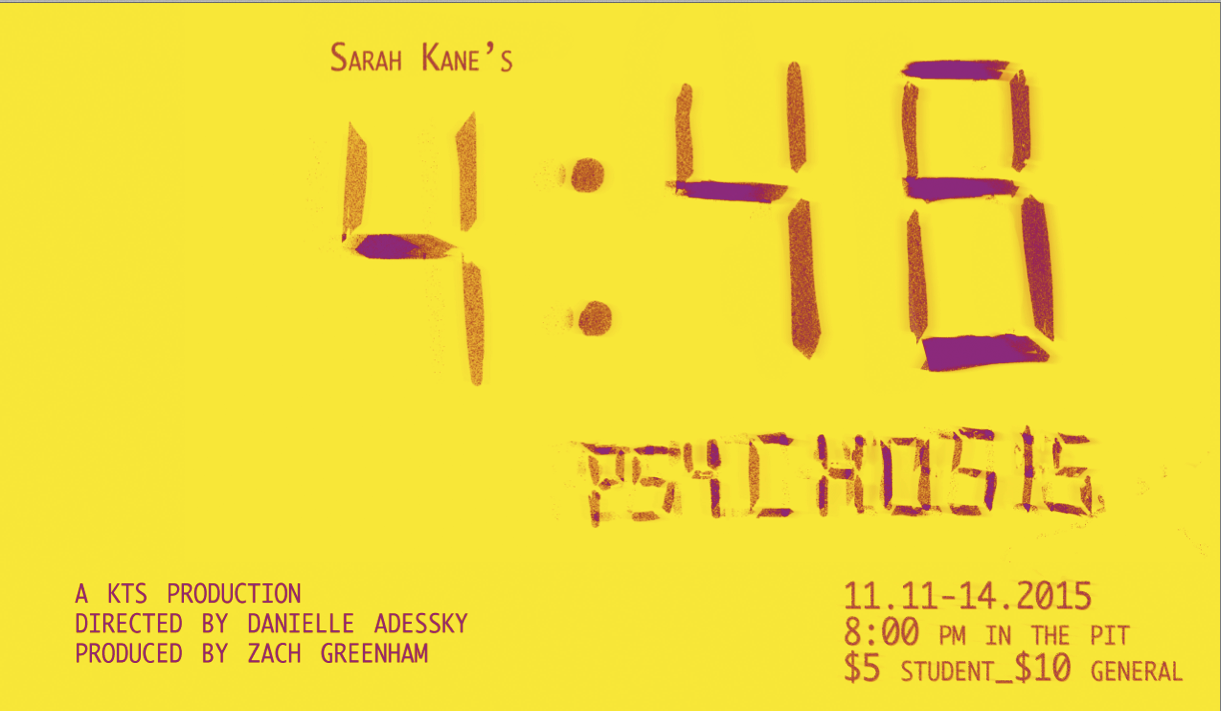 Danielle Adessky is directing the KTS’s current production of 4:48 Psychosis. She shared some of her thoughts about the production with us.

[on the play’s history and its relation to the playwright]

4.48 Psychosis was written by British playwright Sarah Kane and first performed in 2000. Kane herself died in 1999, and as most people who have looked up the play probably know, it is considered an autobiographical suicide note of sorts. This is not explicitly clear through the actual text, but it’s a hard narrative to avoid. In the case of this production, the protagonist is not Sarah Kane; she is just a woman.

I was initially attracted to the script because of its shapelessness. The other two productions I directed for the KTS [Betrayal and Venus in Fur] were very straightforward and traditional plays, and I wanted to challenge myself and explore the possibilities of having more control. Once I got through the play, however, the content became the most important feature for me. The play is a devastatingly raw and intimate portrayal of depression, and in itself is an important treatment of the illness because it shows how unforgiving it can be. The protagonist is a smart woman and is well aware of what is happening to her, but is powerless to stop her spiral even when she tries to do the right things. The play speaks to the necessity of support for people in the protagonist’s situation. Just being an audience member is not enough.

Having said that, I think the content of the play is almost too unforgiving, and I thought it was really important to try and depict the protagonist exhibiting an external happiness as much as possible. Even people who seem happy to us often have much more going on inside them.

Kane doesn’t leave you totally out to dry: there are plenty of scene breaks and occasional dialogue signifiers. But yeah, for the most part it’s poetry. It took me a very long time to go through the play and break the lines up for the different parts. Originally, I just sectioned off chunks that I knew I wanted said by the protagonist, her subconscious voices, and the boyfriend. Then, after the auditions, I had to go and break these up even more minutely line by line. The voices were the hardest part.

[on the collaborative process of creating envisioned characters]

I knew from the start that I wanted to incorporate the internal struggle the protagonist was going through as my major theme, rather than depicting it from an outsider’s perspective. This also included having subconscious voices interact with the protagonist. That was the foundation of my vision before auditions, but I knew this was going to need to be a collaborative effort, and I was extremely happy to be able to cast brilliant and talented actors and actresses for the roles. During the rehearsal process, my cast, in particular the 4 voices, really explored and came to an understanding both as a unit and individually, of what the identity and “voice” of the voices would be. This production was hugely reliant on the talent and work of every single member of the team.

Kari is a great actress and she is awesome as our protagonist. She’s a very self-driven actress, and is totally willing to explore and experiment with her character without my direction, which is something I really appreciate. I think we work quite well together. Working with her on this production is much different than working with her on Venus in Fur, because the material is night and day. Our rehearsals for Venus were very lighthearted because Vanda came so easily to her. This season, rehearsal with her was much more thoughtful, experimental and difficult, as I think this character was much more of a challenge to her. I think she would agree with that.

[on imagining the set]

With a dense, heavy play like this, I think it’s important to use production elements like set, sound, and lighting to help convey messages to the audience. The set in particular was very important to me. I wanted the play to have an isolated feeling to the audience because it mirrors what’s going on in the protagonist’s mind. It gives the audience the same feeling as claustrophobia. I wanted the set to be white because it’s clean and put-together, which represents how I wanted our protagonist to be understood externally. The voices, being all in black, represent a disruption to this beautiful and simple external presence. Both the cleanliness and happiness of the set, and the darkness of the voices are claustrophobic to the protagonist, just like everything else.

[on what audience members should keep in mind]

It’s a short play, but it’s very dense and draining. It may not be as entertaining as American Buffalo or as funny as 39 Steps is bound to be, but I think that’s why we’re sandwiched between them. The performances are great, and the material is captivating, but some people will find it very hard to watch. However, as hard as it is to watch, I think that it is important to. I really hope the King’s community will come and enjoy our production and be encouraged to discuss the content of the play openly and respectfully.

4:48 Psychosis runs Nov 11-14 in The Pit. A panel discussion between Dr. Sarah Clift, Dr. Roberta Barker, Jim Dalling, and Matthew Apostolides will follow Thursday evening’s performance. They will discuss the play and the relationship between mental health and art.