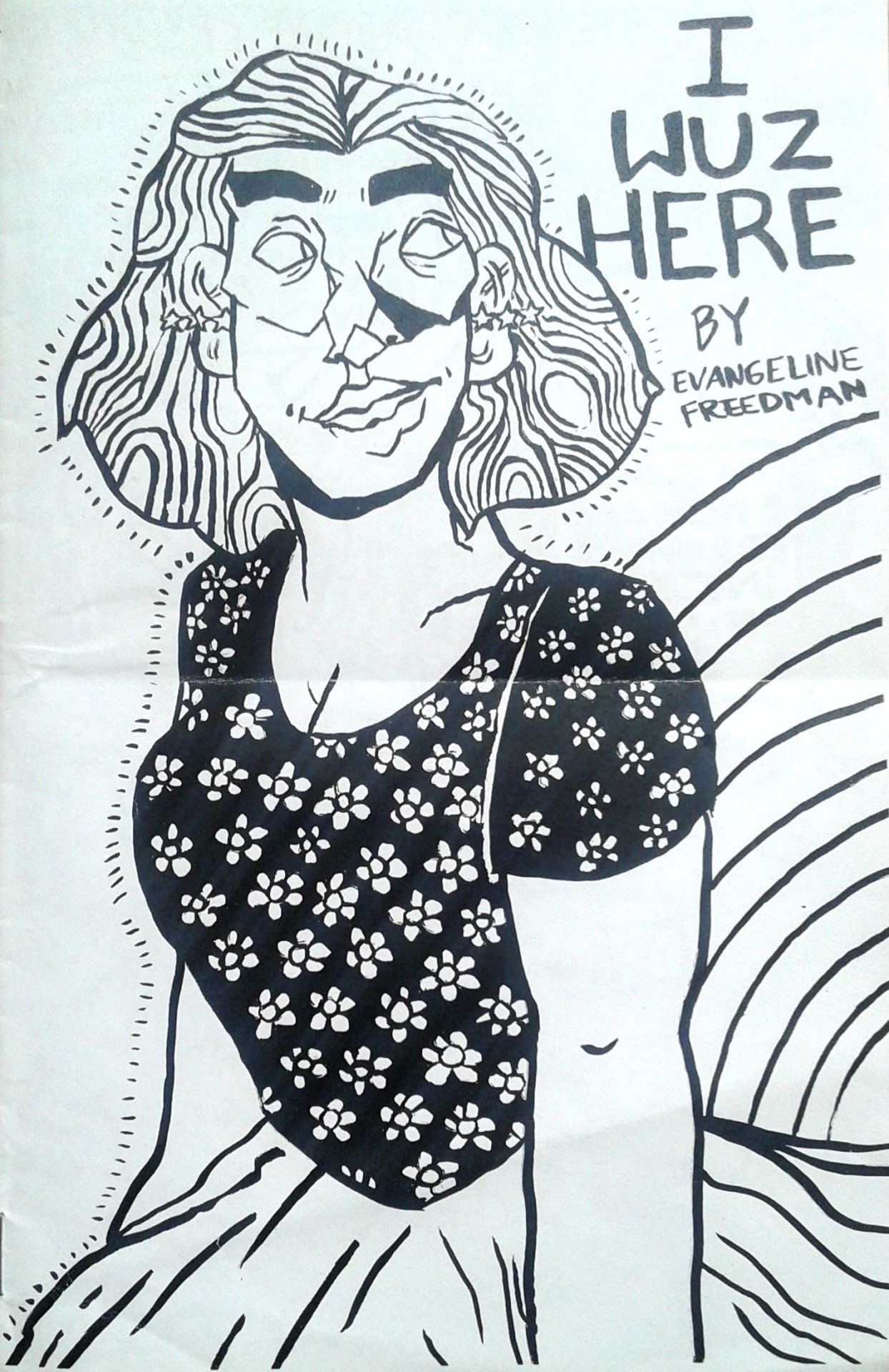 Evangeline Freedman is a second-year King’s student studying Gender and Women’s Studies and Early Modern Studies. She is an artist who creates comics and zines, and you can see excerpts of her comic I Wuz Here included throughout this interview. We spoke to Evangeline about her inspiration for her work, her current projects, and her thoughts on women in comics.

On her artistic work:

I’ve done three zines called Wasteoid that are based off of graffiti on Gottingen Street. They’re about me, my life. All the work I’ve done up until now is really unplanned. Even when I’ve done those pages, there’s been no page planning. It’s mostly fragment. What I want to draw, I’ll draw. There’s no planned meaning other than what I want to reflect on. I made I Wuz Here to reflect on FYP.

Is there a storyline or a subjective progression in this comic?

A lot of it is about personal relationships and mental illness. Before I was with my current partner, I was in a really shitty relationship, and the one I ended before I came to college was also pretty awful. So some of it is about working through the urge to go back and look at it and analyze it. And to go back through the harshness and the bad stuff that happened, the compulsive urge to check up on them — to do better and be better than them. It’s also a lot about feeling like a crazy person as a mentally-ill woman because I think the train of thought there is much quicker than for men. So it’s kind of a ‘hysterical broad’ comic. I’m really into reclaiming that. I think my next comic series is going to be called Dizzy Bitches because that’s what me and my roommate refer to each other as; “Oh man, we forgot to take the garbage out tonight, fuck we’re such dizzy bitches.”

Is your work a way of processing your life and creating a narrative, or is it mainly artistic inspiration?

I used to really want to be an animator. I was interested in clear storytelling, story-boarding, fantasy and science fiction narratives which, as fantastical as they can be, are usually straight-forward in terms of timeline and clarity. All of the art that I’ve made since I’ve come to King’s has been fairly abstract and stream-of-consciousness. It is a processing, but I don’t know if it’s about creating a narrative because I don’t really agree with the idea anymore that life can be a real narrative. The idea that if bad shit happens to you, you continue to go up and at some point you’ll plateau and everything will be okay, I don’t know if as a person and a mentally-ill person, things really work like that anymore. […] A lot of the time when I’m making shit I don’t realize what it’s supposed to mean until I can look back on it and say, Oh this is what I was trying to work through.

On women in comics:

I’m doing a comic for the Purity Journal, an online literary magazine, about Julie Doucet. It’s about women and underground comics and how I feel that underground comics as a scene has tended to miss women. There’s been all these comics about women, for women, by women, about women’s experiences but they tend to be more linear, narrative driven, illustrative style, like Alison Bechdel. Things like women’s comics have had a tendency to go from the political to the personal, rather than the other way around. That’s totally respectable, but I just really want to see more female artists who are disgusting and brutally honest and portray life as gross and gritty. Julie Doucet does all that and I’m super inspired by her.

What is it about the graphic novel that is such an effective means of carrying women’s stories?

I think illustration is a women’s medium and has been for a long time. More than that, the possibility to self-publish is really appealing. Female filmmakers have to edit or censor or not follow their original plans, but with comics all you really need is a Xerox machine, a pen and some paper. Especially with the internet, you can distribute your stuff super widely.

I’m working on a comic called “What happened to Ismene?” It’s a four-part story about Ismene from Antigone. [Bringing stories like hers to light is] a lot of what I want to do with my work, especially since coming to King’s and feeling the real burn for female authors and characters that aren’t included in the canon, but could be if someone just took the time to lift them up. So I want to lift her story up. She’s the last living line in this cursed family. All she does throughout the story is remain domestic and responsible and a caregiver to everyone around her. At the end of Antigone, she’s just left alive with no indication of what happens to her. Her entire family is dead, she has a curse on her bloodline and she has never stepped foot out of her domestic responsibilities. I’m interested in exploring what having things happen to you that you have no control over would do to a person. It’s four segments and different possibility for responses to that. In one of them she remains totally attuned to her domesticity. In another she burns down the tomb of her family. In another she’ll be living with a nice shepherd boy and moving on. I don’t know what to do with the last one yet, but I think her story needs to be explored. I really wonder about her curse in relation to my own family’s experience with mental illness. Sometimes it feels similar. There’s this bad thing that nobody really knows who started the cycle but it’s being passed down even if you didn’t ask for it or take any part in it. I feel like that’s really similar to having a curse on your bloodline and you have no idea why you deserve it.

Check out another one of her projects here!