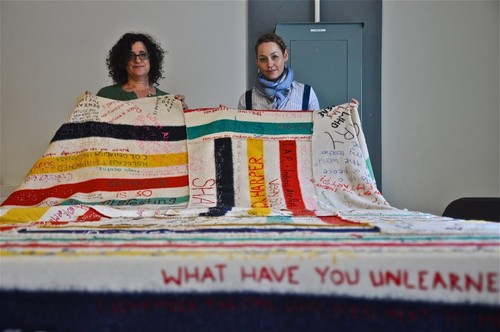 We hope you all got to see it! In case you missed it, here’s a little tasty snack (think leftover turkey giblets) RE what was going on.

In the 2009 G20 Summit, Prime Minister Stephen Harper publicly declared that Canada had no history of colonialism; this was after his OFFICIAL apology, in 2008 (look!), to Aboriginal communities and individuals living in Canada who suffered and continue to live the consequences of the Residential School System and colonialism perpetuated by the Canadian government – cue Harper’s 2009 denial statement. It was Harper’s profound ignorance, denial, and insensitivity, which only briefly occupied news headlines, that inspired settler artist Leah Decter and settler/Indigenous curator Jaimie Isaac to create “(Officail Denial) Trade Value in Progress” as a means of inspiring and generating awareness and further dialogue on this issue.

This piece, in its initial state, was a collection of Hudson Bay blankets sewn together to form a large hanging tapestry. Harper’s quote, “We also have no history of colonialism,” was printed on the middle panel. The Hudson Bay blanket, now an iconic Canadian emblem, was used by settlers to spread smallpox among Aboriginal communities in the mid 1700s. It has therefore become a powerful symbol of our colonial history, the history which Harper denied.

Over the past four years, the hanging tapestry of politicized blankets has circulated around Canada, moving between art galleries, schools, friendship centres, reserves, and other public spaces. Audience members recorded their reactions to this piece in a book that travelled with the blankets. The final and perhaps most essential component to this project is the public communal sewing action that happens at each location that the piece occupies, where people sew the recorded reactions, ideas, feelings, and questions of others onto the tapestry of blankets.

This piece in itself could be considered a work of decolonization as it brings together Canadian communities around themes of settler guilt and reconciliation. It challenges us to unearth which ways and which parts of the Canadian identity we choose to adopt, and further asks us to reflect on what injustices we might perpetuate in adopting these identities.

Read more about it here.