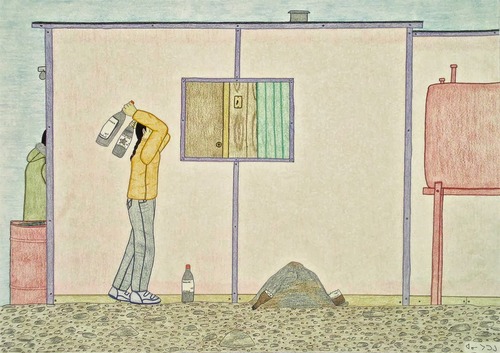 After having such a positive experience participating in Leah Decter and Jaimie Isaac’s sewing action a few weeks ago, I was disappointed by the current exhibition at the Art Gallery of Nova Scotia (AGNS) called “Northern Exposure.” The gallery continues the contemporary trend of “soft inclusion” of indigenous artwork in this exhibit. Indigenous curator Lee-ann Martin describes this trend as a technique to absolve “the institution from a long-term commitment to serious treatment of works by Native artists… [This] gives the impression that there is no problem of exclusion.” It is not that the AGNS fails to include work by indigenous people but the way that the gallery presents indigenous and settler art that is harmful.

The first part of the exhibit is donated to anthropological type prints of Inuit people (in the prints referred to as Eskimo) made by early colonial explorers. There is very little mention of the effects of colonialism. The second part of the show is historically severed from the first, and instead, the two sections are connected by the theme of “the North”. The art in this section is concerned with “contemporary concerns and issues”. The attempt to use neutral language by curator David Diviney is harmful because it fails to address the history of the land and the people. The show completely avoids naming the particular identities of the artists and does not include which artists are of settler or indigenous descent. While it is important to be sensitive to potentially victimizing aboriginal people or unearthing a traumatizing past, it is also important to recognize within the gallery space the hierarchy of indigenous-settler relationships as framed by a particular history of colonization.

One of the two indigenous artists shown, Annie Pootoogook’s work explicitly deals with the effects of colonialism. The gallery exhibited some of Pootoogook’s less gruesome pieces that depict domestic violence, which she is best known for. At the AGNS, the works of Pootoogook show banal scenes from the contemporary home life of Inuit families. Her works demystify notions of Inuit people unaffected by the modern age. Pootoogook’s work, and the work of the other Indigenous artist shown, Mark Igloliorte, both deal with the effects of colonialism. The gallery’s text and curation do not point out these issues. It is my contention that this move was made so as not to villainize the explorers featured in the first part of the exhibit, which was included because of the excitement surrounding the recent discovery of remnants from Sir John Franklin’s expeditions. Indigenous scholar Paulette Regan calls for an exploration of “how colonial violence is woven into the fabric of Canadian history in an unbroken thread from past to present”. This tie from past to present is precisely what “Northern Exposure” fails to recognize.