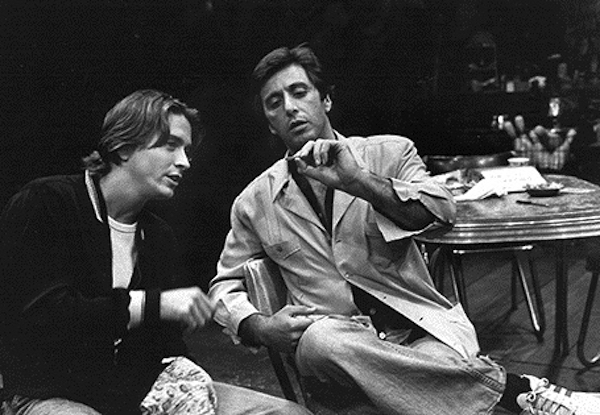 We spoke with Mike Tucker, director of the King’s Theatrical Society’s upcoming production of American Buffalo. Mike lives for theatre and hosting trivia @ the Wardy. He has recently assumed a moustache as part of a character study for his Halloween costume.

AA: Can you pick three words that describe American Buffalo?

AA: What drew you to the script for this season?

MT: I’m a very classic theatre kind of guy. I don’t go for big sets, period pieces or high fantasy. The kind of theatre that appeals to me is very simple character pieces and American Buffalo (with a lot of David Mamet’s other work) really excels at just telling an interesting story with complex characters.

AA: The play premiered in 1975. What themes continue to resonate most strongly with audiences? Will AB always be relevant?

MT: The play explores hetero male relationships and how men feel like they can’t speak to one another directly and emotionally, and I think that is a sentiment that echoes as much today as it did in 1975. The thought of the show always being relevant is interesting because on one hand I feel that these emotional walls that some men build around themselves and how they interact with other men due to socially ingrained ideas of masculinity need to be reexamined and in a lot of cases torn down. However, I don’t really see that happening anytime soon so I think the show can stand as something that people can come back to to speak about these problems.

AA: How have you and your actors approached the misogyny and homophobia present in the script?

MT: It’s been tricky, I can’t deny that. A lot of my own reservations about pitching this show to the KTS revolved around how the King’s demographic at large might react to some of the more risqué lines and scenes. Controversial shows are great but if you’re putting something up for the sake of shock value without any substance then you’re doing it for the wrong reason. I know people are gonna be offended by this show, I was the first time I read it, but I think theatre is a wonderful way to start conversations about these types of issues.

These characters are inherently flawed as individuals and I think sometimes an audience wants to relate to the characters they’re seeing on stage and with this show you don’t really have that luxury. Sometimes to attack the stigmas surrounding the dialogues happening everyday in regards to misogyny and homophobia you need a show like American Buffalo to show how far the extremes go. These characters aren’t meant to be idealized and I think that once people move on from the idea that by just putting this kind of show on that we’re glamorizing misogyny and homophobia they can really see what the show is trying to do.

AA: What’s been the most challenging part of the production?

MT: Putting a show up in four weeks is never easy. Thankfully my cast and crew have been absolutely fantastic and have thrown themselves into their respective roles and jobs. I can hardly believe the process is almost done but that’s the reality of doing a KTS show. It’s scary and stressful but always exciting.

AA: And what’s been the most exciting part of the experience?

MT: Seeing the show move beyond everything I ever imagined it could be. I figured at the outset that as long as the show looked good and the actors knew their lines I’d be happy. But at every rehearsal I’m learning something new about the characters through the actors’ performances. I also have my actors and crew chiming in with their own creative input, which is exciting cause they can take a scene in a direction I never would have thought of reading this script cover to cover so many times.

AA: Is there anything else you’d like audience members to know or consider before they see the show?

MT: See it twice. It may sound arrogant but I’m not gonna lie and say this show isn’t complex. I won’t spoil the ending but I think people who are unfamiliar with the show may be a confused and a little enraged at how the climax plays out. But the show really is about the characters and their journey together. And I suppose if you can’t see it twice then come in with an open mind and let yourself be taken in by these characters. They’re not always pretty but I think there’s an important lesson to be learned from this show.

American Buffalo stars Genny Dow, Saunder Waterman, and Sam Hodgkins-Sumner, and is produced by Nathalie Marsh and Adam Tate-Howarth. The show runs November 4-7 in the Pit.