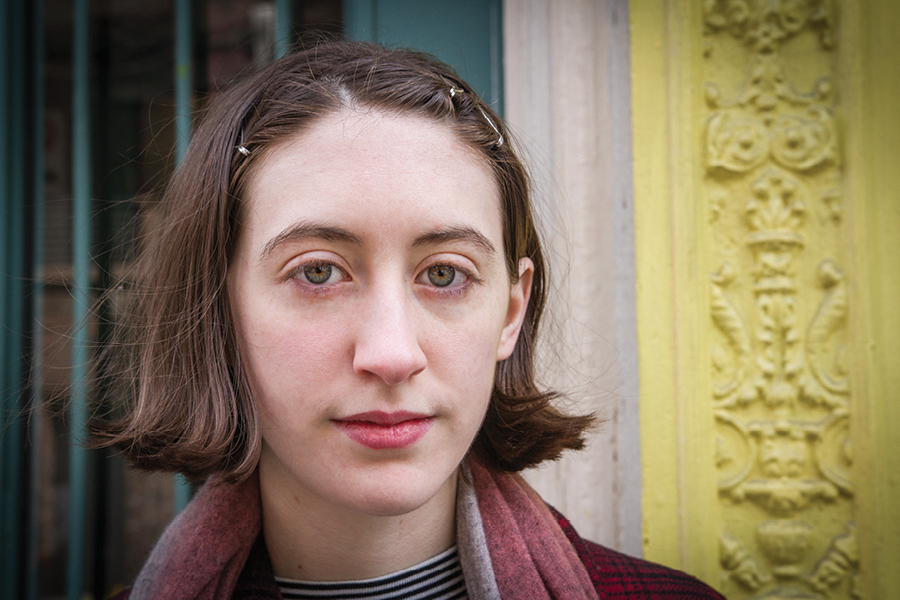 A few months ago, I sat down with Greta Kline, aka Frankie Cosmos (speaker to my 20-year-old soul).

We were in Amsterdam and both very far from home. The bike storage outside of the entrance to the show’s venue—a canal boat, literally a boat full of bikes on a canal—was a good reminder of that.

After soundcheck, we rushed up a narrow and winding Dutch staircase to her dressing room to chat. Our conversation was a short one, about ten minutes, and soon after Kline was onstage as Frankie Cosmos.

“It’s fun being the only band playing the show because we can play everything we want and you can’t tell us to stop,” she joked to the crowd.

The Amsterdam gig was one of the few times Frankie Cosmos had played a solo set (it’s probably worth mentioning that the last venue they played by themselves was the Museum of Modern Art).

Kline is still getting used to her ever-growing following. Before the release of her 2016 album Next Thing and 2014’s Zentropy, she was posting her insightful indie-pop demos to Bandcamp without knowing if people would listen. For years, she had a much smaller, but equally devoted, cult of fans.

Kline still manages to keep the intimacy of those early bedroom recordings alive in her latest releases and live shows. There’s a sense of familiarity when she plays that doesn’t just come from having listened to her songs on repeat for an entire summer (though I admit it might have helped).

Her lyrics speak to you through little rushes of memory and observation. Listening gives you a warm, sad I-get-you feeling that makes you grateful to have joined the cult.

AA: Do you have a favourite song to play off of “Next Thing”? Are there songs you won’t play at shows?

FC: It depends. There are some songs I like to cut from the set because they’re hard for me to sing. If I feel like I’m doing an amazing job, I’ll say “okay, I’ll play it” because the band likes to. The band loves to play “What If” and I hate playing it. Right before we left, we had to change the key it’s in, so we’ve been playing it a bit more. I really like playing “Sappho,” but it’s also a harder one. It always depends on the crowd. If it seems like people aren’t really caring about the “Next Thing” songs, sometimes I’ll just skip em and go to Zentropy songs because people just want to hear “Birthday Song.” I said this before in an interview and people have been asking about it but “Too Dark” is one of the songs I refuse to play if people aren’t paying attention. It’s not like a punishment, but if people are talking I won’t play it since it has these totally silent pauses. My band gets so mad because I won’t make a set list and I’ll just tell them as we’re going based on how I feel [laughs].

AA: You’ve always written very candidly about your experiences and people in your life. Now that your music is reaching so many more people, are you finding it harder to write vulnerable lyrics or is it a part of your creative process that never changes?

FC: Yeah. I mean I really don’t want that to change because part of a reason why I write is to get stuff off my chest or deal with emotions. I haven’t been thinking about it when I’m writing but I do think about it when I’m performing now. Especially vulnerable lyrics make me kind of stressed out sometimes when I’m performing them. I don’t want it to affect the writing, but it is scary. To me it’s scary to have any sort of responsibility towards the audience. It’s scary that someone’s going to hear something I say and have it affect some choice in their life. It was really cool but I met someone who said they were going to get a lyric of mine tattooed on them and I was just like, “Oh my god. Don’t do that. That’s a terrible idea.” And I didn’t want to tell them what the lyric was about because it would crush them. What it’s about is really messed up. I could tell what they thought it was about. I don’t feel like an adult at all so it’s kind of scary to imagine somebody hearing a song and thinking something’s cool that isn’t cool.

AA: Yeah. But it’s also kind of cool that that’s what your music does for so many young people, especially young women: makes sense of something, even if it’s taken in a completely different context, and lets them find find meaning and comfort.

FC: Definitely. I like to think it’s not my responsibility to make a clear message, that I can write as vaguely or specifically as I want and people can hear whatever they want from it. I shouldn’t have to police that process. They can take whatever they want from it. But it is hard to hear something when it’s really personal – to hear someone make an assumption about what you’re saying—that’s horrifying.

AA: Were you thinking about that responsibility to listeners when you were just putting your demos on Bandcamp?

FC: Not at all. Not until really recently. I just started to feel that way on the last America tour because you meet a lot of people that have been affected by our music. And it was amazing and really beautiful hearing someone say a song meant so much to them and having specific stories about songs. They feel like they already know me and then when I hear their stories I feel like I know them. It’s so special to meet people that way. But it’s also scary to think, okay, something I wrote as a sixteen year-old or about being a sixteen year-old is affecting your life and that’s really intense. I think about when I took in music as a teenager, and especially when I met an artist I admired, anything they said I would have attached to. Just being a person and then having the idea of being a role model—that’s terrifying.

AA: Speaking of musical influence—you collaborate and tour with so many cool musicians and friends—especially all these cool women like Gabby Smith [who used to play keys in Frankie Cosmos and also fronts the band Eskimeaux] and Girlpool. Has that mostly influenced your music or the way you work in the industry?

FC: Everything. I think the people I choose to be friends with are really important to me. Their writing is really inspiring to me and also the way they navigate being on tour and in weird situations. I mean, I learned how to tour having Gabby by my side in the band. All the ways I learned how to take care of myself are from her and from Aaron [Maine], Girlpool, Yowler… all those tours. Watching them interact with people they don’t want to interact with, or deal with someone who is harassing you on stage. The way those people use their voice to affect a situation is really inspiring to me. They even just help me learn how to retain any kind of self-love on tour because it’s really difficult sometimes. It’s really nice to have strong role models who are my friends.

AA: I know you love Frank O’Hara. Do you have any other favourite poets?

FC: I think my maybe number one favourite poet is Elizabeth Bishop. I haven’t read enough of her poetry, but I’ve been reading a lot of novels by Margaret Atwood. I’ve been really inspired by that recently.

AA: Do you find your love and study of poetry affects your lyricism? Do you consider it when you’re songwriting?

FC: I don’t think about it too much, but I do write poetry and I see it as pretty separate from writing lyrics. I’ve been running this really small online poetry group where I just send in a poem every month and hope other people send in theirs. Almost nobody does it, but I think it’s a good exercise. It feels like a really different process to me. But I think reading a lot of poetry definitely affected my lyrics. I think Frank O’Hara’s poetry had a huge affect on the way I write because it’s just finding little moments and beauty in everything and just writing a ton of stuff. Just taking in everything all the time and always having a notebook on me. That was super influenced by his ideology.

AA: What comes next after this European tour?

FC: I’m really excited to be home for a month and a half. Then we’re touring again for four months. But we’re going to finish arranging our new album. I have some songs that I need to finish writing that I’m really excited to go home and finish. I can’t wait to have band practice. I know it’s a weird thing to say, but I can’t wait to go to band practice and work on new material because it’s really different than playing the same songs every night. And, of course, to spend time with my family and my boyfriend [laughs].