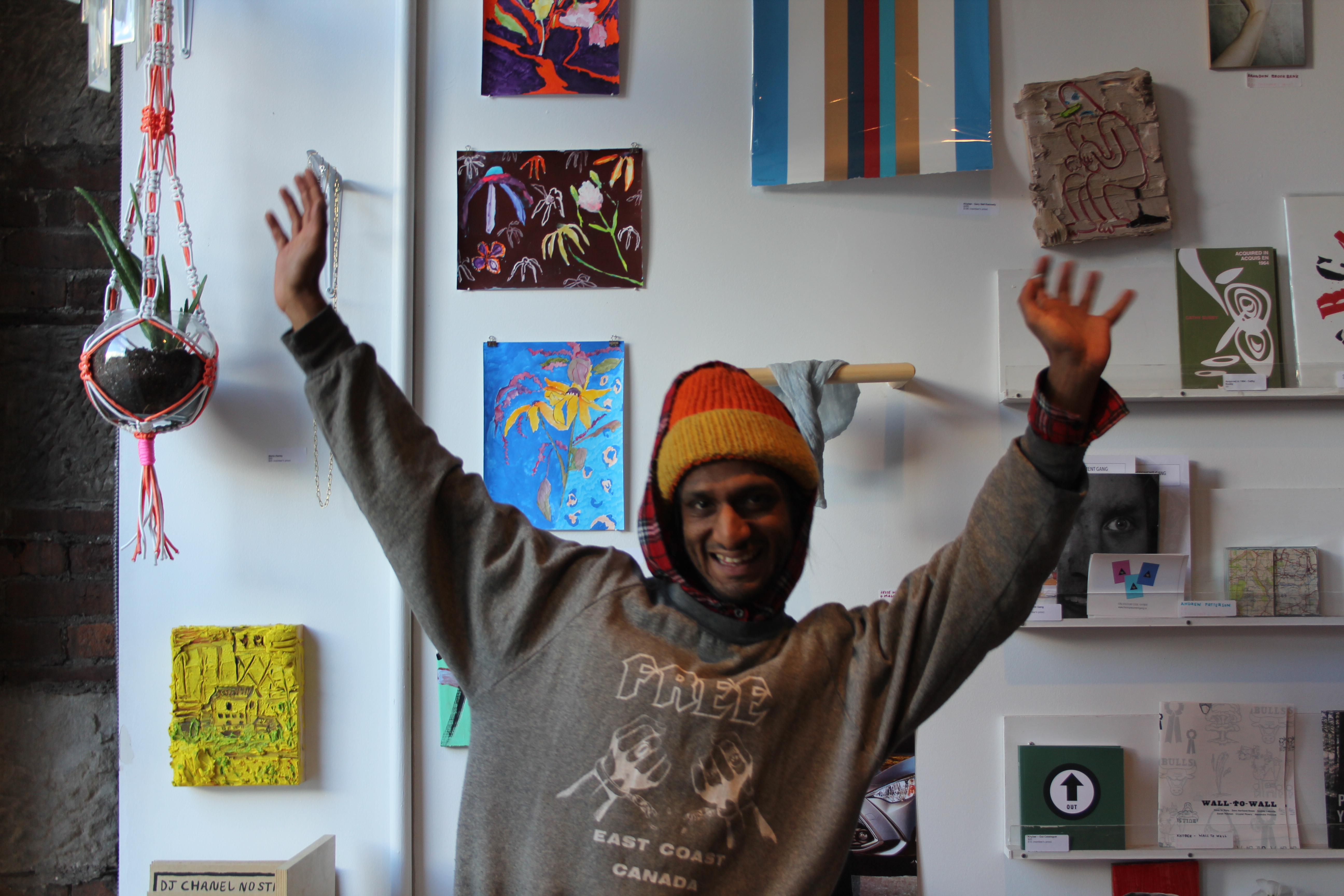 The Arts Abstract sat down with musician, engineer, artist, and all-around incredible person Nick Dourado at the Khyber Arts Centre at the end of September to talk to him about his month-long residency, Harmonic Spaces.

The residency featured three weekly workshops, Sound Club, Math Jam and the Peoples Choir. Each one invited community members of varying experience in the respective three fields (improvised music, math, and choral singing) to the Khyber to learn from one another and challenge and unsettle themselves by improvising, asking questions, and collaborating. The following is an abridged version of our conversation.

AA: How is the residency going?

Oh it’s been so awesome. I’m running three different workshops each week and they’ve been a lot of fun. I have a key to the Khyber right now so I’ve essentially set up everything in my house except for my bed and the kitchen. So I have truly been here all day and night since the 10th of September, but it’s really awesome because I rented some fancy recording gear and I essentially set up a recording studio here.

AA: Cool. Are you doing Century Egg and Eddy stuff?

Century Egg is going to start recording tomorrow here and I’ve recorded a lot of my friends who do poetry or spoken word or play improvised music … I’m doing all this because I was brought into an amazing tradition of improvised music that goes on here in Halifax. These are some of the greatest secrets of Halifax.

It’s impossible to know why they’re still secrets, but new music, creative music, and free improvisation and jazz have an incredible connection to Halifax, Nova Scotia. There’s not one but three totally different organizations devoted to creative new music. The people who are involved in them are internationally known as great masters. It’s crazy and it’s been like that for the last forty years here.

AA: How did you get involved in it?

Have you ever heard of a person named Tim Croft? He teaches the History of Jazz class at Dalhousie and when I was in Engineering school I got to take two electives and that was one of them, which is where I met him. So not only did he run a weekly drop-in music workshop, so did Suddenly Listen, which is also based in Halifax and run by a guy named Norman Adams. So at 1330 Hollis, both of them, for I think 20 or 30 years, ran weekly music workshops.

They’ve both been set up here teaching about contemporary music in a really deep and truly contemporary way. Through that I met a person named Jerry Grinelli who I wonder if maybe you’ve heard of? He’s a true-to-god living legend who lives in Halifax. His claim to fame in an unfortunate way is that he played the drums on the Charlie Brown Christmas records. He came from San Francisco, and went on tour with the Grateful Dead. He’s an enormously influential musician in the world. Although again, all the things I’m telling you are the wackiest things he’s done. He’s from the contemporary free music scene in San Francisco and he became a Buddhist and ended up in Nova Scotia and sort of teaches a blend of African American free jazz music cut with his Buddhist training, which is called the Creative Music Workshop. And so I’ve been involved with that for five-ish years now and it has totally changed my life.

Tim was Jerry’s student when Tim was 19 years old, 20 years ago. It’s amazing. It’s a living tradition of music in Halifax.

AA: So now that you’re doing this residency, what are you bringing to your workshops?

I’ve had a lot of teachers blow my mind my whole life and I’ve always been curious about that tradition. I think that’s kind of what inspired this whole thing—wondering about how many kinds of ways can we do teaching and community practice? The teaching is part of how those traditions are maintained and passed on.

Most of what the Math club is about for me, is getting people to ask questions. I can answer every single simple math question. It’s just a tradition, right? And it’s a tradition that I’ve been very fortunate to be connected to. … If someone asks me a high school math question that I couldn’t answer—which actually does happen all the time—it’s thrilling. I feel like all people who have higher math education should do some form of community care in terms of tutoring because we have such a problem with the literacy of math in our world, and it’s because of capitalism—because the only reason you wouldn’t want to share knowledge with somebody is because it empowers them and we do live in a world that seeks to take power from people so they can abuse them and it’s insane. It’s so insane. It’s insane that that’s the reason that math education is in such a bad state.

There’s an Assata Shakur quote that comes to mind:

So many of the ways people hold power over us is by not giving us the literacy of numbers.

AA: Have you had anyone come to a math jam and just tell you that they couldn’t do an equation or a problem? Like, in the Arts community there are so many people who are terrified of math and refuse to go near it.

Well, that’s why I called it ‘Math Jam,’ because if I called it math class there would be less than four people there every time. Everyone I know says, ‘Oh, that sounds so interesting, I would love to do that,’ but don’t come because they’re terrified. Everyone who comes is mostly terrified.

Everybody has so many feelings around math, mostly shitty, horrible feelings. This is my personal philosophy, but I think they use math as a tool to belittle people in North America. Like, if you go outside of North America, they don’t have the same kind of relationship with math. It’s such a big problem. So many of the kids I tutor that hate math and have trouble with it—they think they’re super bad at it, but they’re usually great at it, but something was left out in grade five or something.

AA: So, part of your teaching through Math Jam is removing that hierarchy you’re talking about?

Yeah… when you’re working on anything or any other kind of tradition like math, you’re really working on yourself. What we worked with the most with my music teacher, Jerry, is fear and habits and the way that they make it impossible for you to play music, and I think that it’s the exact same way with math—or I guess that’s what I’d always sort of been feeling, because I had a great teacher who taught me how to deal with those things.

AA: How do you establish spaces for community learning? What do you think is key in making people comfortable?

Part of what you said was ‘a space to feel comfortable’ … But workshops like this aren’t comfortable. It’s not a comfortable thing to do. Part of the tradition that I’ve accepted from my teacher is that you really can’t be comfortable, and it’s not necessarily ‘being comfortable being uncomfortable,’ but just like where does that desire to give comfort so much value come from? It’s just a part of the workshop, like can you learn and be comfortable at the same time?

AA: Even a distinction between ‘comfort’ and ‘safety’—like, you may not be able to create a comfortable workshop, but perhaps a safe space, especially for people who have much less access to these spaces.

El Jones once said something along the lines of, “There are no ‘safer’ spaces, just ‘braver’ spaces.” I’m not even sure if she coined the term, but I heard her once mention something about a “braver space,” like the idea that safe spaces are also kind of antiquated. But that we are personally accountable to each other and to acknowledge each other, ask questions, and have intention… I don’t even know if I even really succeed at that part. All I can really do is hold the space.

AA: What’s been challenging about the residency?

I have to sleep—it sucks. Having access to the space is so key. Just knowing that there’s a time limit… I don’t know, it’s kind of been nothing but blissful.

I had some dude at the last math club kind of like, argue with everybody and challenge them on the idea that capitalism has ruined the way that we educate people… He was arguing that it wasn’t intentional, like some people find that idea controversial, perhaps? It was a really awesome moment in that math club because everyone was like, ‘What the fuck are you talking about,’ and that dude explained and we got to have a really polite but serious discussion about colonialism in my math class. That was awesome.

AA: When do you get to have conversations about colonialism in math class? Has that happened, like ever?

One of the teachers that I had that made me think the most critically about the world around me and about capitalism was a math teacher that I had named Guy Kember, who teaches engineering math at Dalhousie. He lives on a farm and makes all of his own stuff and comes into class and never has a book, never goes off of notes… He’s one of the coolest artists I’ve ever seen, oh my god.

It’s so weird being connected to an awesome tradition like mathematics and then turning around and seeing the way the rest of the world is taught to access it—because it’s a gift and a beautiful tool… That we hate it and don’t see it in our lives and never hear anything cool about it is wrong. It’s so weird and it has nothing to do with the essence of that thing. It really speaks volumes to the way we live in our world.

AA: It’s so weird to hear you talk about all of this because I feel like there’s such a distinction made between the arts and maths and sciences. That’s normally just a dichotomy made in society.

Yeah, fuck. It’s so hard to talk about this without expounding my personal philosophy about life, too. All of these things are just things we’ve inherited from white, supremacist, colonial institutions—like mathematics is one of the oldest human traditions, and it comes from brown and black people. The separating of maths and sciences has nothing to do with the original world.

Like, in Hindustani tradition, there is no distinction between math and science. They both work on such similar underlying principles. It’s also funny, because this has been my perspective the entire time, since I’ve been interacting with math.