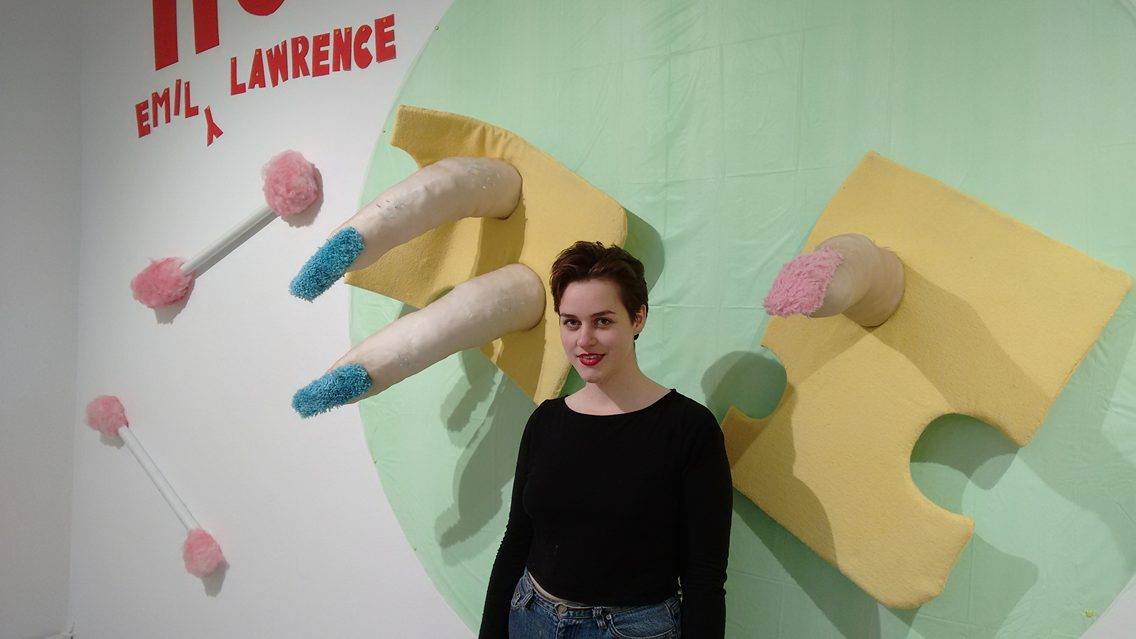 HODGEPODGE is aesthetically an advertisement, materially, food in costume. It’s domestic and feminine, but playful and childish; it’s heated and seductive but disgustingly pornographic. An erotica cartoon dripping in popsicle sweat.

What led up to this exhibition?

I started making video again and wanted to get in the habit of sketching with video as a way to be making something. That turned into my last exhibition at Anna Leonowens in the summer called Mouthfeel, with Kylie Dyment. My work shifted nicely from Mouthfeel to this exhibition because the content is sort of the same. I wanted to see if the content from Mouthfeel could have the same effect in a 3D form. I feel like everything I’ve done up until this point has been “sketches” for this. Before this I did a mural at the Anna Leonowens gallery. It’s in a retro advertising aesthetic. I was also working at Eyelevel Gallery coordinating this event series called Food for Thought where we would host public picnics and record them for podcasts. We also did a couple artist talks with potluck lunches. Last year I co-curated with Ryan Josey the Queer and Feminist Exhibition which happens at Anna Leonowens every year in the winter. The show was titled Art and Drag. We put out a call for a group exhibition for works that went through a form of transformation. We were thinking of transformation as a queer methodology for surviving, and thinking about drag as a methodology for creating art work, thinking about how art can make a transformation in material, form, object. So that’s what I’ve been doing for the past year.

Food has been so important my whole life. My dad’s a chef and when I was 12 he opened a bakery. I immediately started working there as his apprentice. So I knew how to make bread before I knew how to do long division. It became so engrained in the way I look at things, especially in my sculptural sensibility. I remember being little and watching my dad pour batter into cake pans and being really mesmerized by all of the textures and processes of baking. You know when there are things in life that just get you, and you’re like “uhhh, it’s so good.” To me that was batter and liquids and mixing. It’s just something I’ve always loved. With this exhibition, I really wanted to figure out why I liked that so much.

There’s something really lumpy and sexy about being in the gallery with your work.

The work has all of these grotesque textures and goo and slime. It all looks like bodies. Something that I’m interested in is the connection between porn and food. I think that food is more pornographic and more performative than we give it credit for. Like the food network, if you compare it to a porno, there are so many similarities. There’s a host and they have like 12 cameras on them; one on their face, one on their hands, the camera gets every angle of the food. And at the end, they savor the dish mouthful after mouthful, you can hear the chewing and swallowing, and moaning with pleasure. It’s like the cum-shot of daytime television. I think everything we consume has a similarity with how we consume women, and marginalized bodies. It’s the same lens. I really want to take the lens that’s full of seduction and satisfaction and fetishism, and apply it to things like food to show that this is how we’re programmed to consume. We’re all synched into our phones, we need to be stimulated all the time. At any moment, there’s nothing that isn’t pleasing to all our senses. Everything is fast, there’s no room for anything that isn’t totally satisfying.

When I started getting into video again, I was editing in a way that was really patriarchal. I wanted it to be really fun to watch. I didn’t want it to be boring, so I was getting rid of everything that wasn’t totally satisfying, and stitching different video bodies together with a quick transition, and an arc of pleasure. I was looking at that thinking, this is exactly how porn is edited. And this is exactly what’s on the food network, or children’s TV. It’s all so amazing to our senses. So I wondered if I should not make work this way, because maybe it’s not a very feminist way to handle video. Or I can use those tropes and co-opt it and use it as a feminist tool.

With this work, I felt like because I was moving from a medium, video, that’s really fast and able to show the full progression of a motion, I wanted everything to be stuck in a moment that’s really hot and seductive. Like if the noses were having a snot orgasm, this is the moment they would be stuck in. [Emily points to three massive paper-maché noses affixed to the wall, with a pink wigs and fabric dripping from the nostrils.] Sometimes I feel like I don’t like sculpture very much, and I really prefer to work in video. But I was getting really comfortable in video, so I wanted to see if I could get the same effect in something that is still. Does something suspended in a moment like this, never going to move, have the same effect for the viewer as seeing the full motion?

I think there’s something anti-pornographic about your work, in that the viewer has to spend a long time with it.

Yes. But I also feel like sometimes the cum-shot is played on loop at the end of videos, and that moment is held for as long as possible because it’s the one everyone wants to see. And like, why does Martha Stewart spend so much time eating her food at the end of her cooking demos. The shots that are emphasized in food demos are ones that really mimic bodies, and those are the ones that are drawn out the most. Everything is held there for an infinite amount of time to reflect the pornographic gaze.

Are you attempting to re-appropriate the pornographic gaze?

Yes, I think that’s a goal. I think I’m working on it. It’s something that I notice when I sculpt and edit, and I hope it’s present here. But it’s something I want to keep working on.

HODGEPODGE ran November 1-5 at the Anna Leonowens gallery in Halifax.