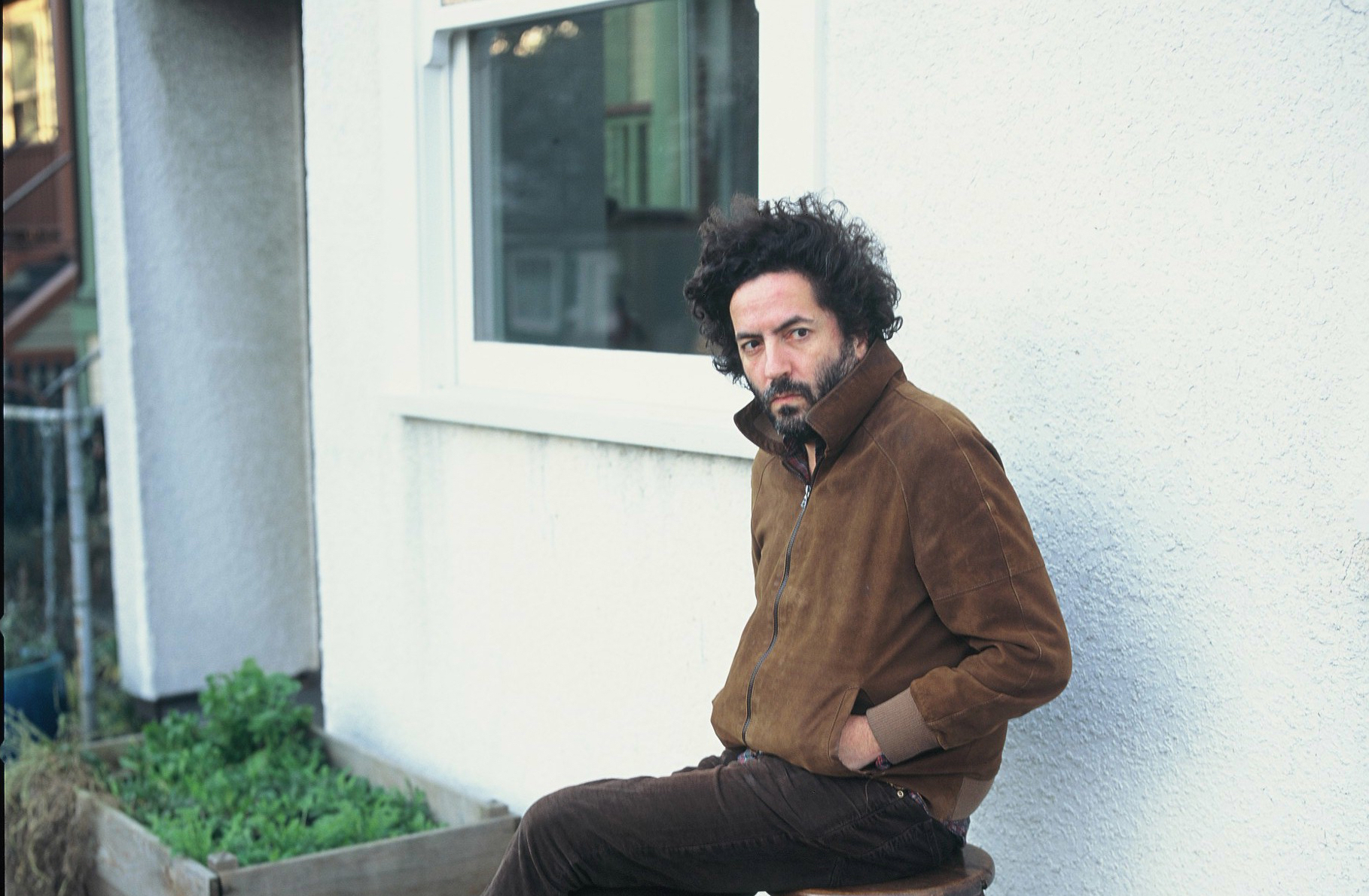 Dan Bejar has been recording and performing meandering, literate songs under the moniker Destroyer for over two decades. In that time he’s toyed with instrumental styles from MIDI to saxophone-inflected, 80s soft rock, but at the centre of Bejar’s project there’s always been a penchant for cryptic lyrics and a fundamental sincerity. He’s recently been touring solo across North America to dive into older corners of his catalogue and test out a handful of new songs. Brennan McCracken caught up with him ahead of his performance in Halifax to discuss his voice, solo performance, and how he sees Destroyer after 22 years.

Your last two records, Poison Season and Kaputt, are arguably the two most instrumentally diverse records of your catalogue and have very distinct instrumental styles. And yet, when you perform in Halifax in a week or so, you’re going to be performing solo. What does solo performance mean to you in light of these two records with such incredible instrumentation?

It means I’ll probably skip playing most of them. [laughs] Poison Season came out 15 or 14 months ago; it feels like a long time ago. So with the tour that I’m doing now, I already feel like that album is old news. There are a couple songs off Poison Season that I can bang out on guitar, and there’s one or two from Kaputt that I can as well. But it’s true that those songs were mostly written on synthesizer, or piano in the case of Poison Season. But I have to ignore all of that stuff, because the idea of me having to replicate what an eight-piece band does with my limited acoustic guitar skills would be torturous for everyone involved.

What I have been playing, because I played a bunch of solo shows last month in the States, I’ve been trying to focus on playing new songs as well as an assortment of songs from the last 22 years. When I go out with the band, the sets generally tend to solidify pretty fast and they’re usually based around a specific album. So this is a good chance for me to play the other 160 songs that we don’t normally touch.

And is that a reactionary move on your part? I know in other places you’ve said that Kaputt especially was the record that threw you into the world of music as commerce. Is touring solo and restricting yourself from some of those songs in any way connected to the more commercial side effects of those last two records?

Not at all. It just so happens that most of the songs that I wrote on the guitar happen to be songs that I wrote between 1995 and 2007. That’s just the way it goes, aside from this new batch—I’ve started playing guitar more and more in the last few months. But it’s not a reaction against anything. I kind of have this pattern of doing a solo tour once every three or four years for the last decade now, and within Vancouver I have a pretty long history of playing just me and a guitar starting from the very earliest days of Destroyer. So [solo performance] is not weird and it’s not even particularly special, it’s just a part of what I do.

The only strange thing is that I’ve never played new songs in front of people. This is the first time I’ve ever tried doing that, because I’m planning on going into the studio to make a record the minute I get home. So part of what I’ve been doing this fall by playing these songs in front of people is just forcing myself to kind of get inside the songs and really figure out what works and what doesn’t, what goes together. All of the stuff that usually happens after you make a record, I thought I’d try to maybe get to know [the songs] a bit before I made it.

What can you tell me about those new songs? Do you see them as differing from what you’ve done in the past?

They definitely feel different to me from the songs that I’ve been writing for the last few years, the Kaputt and Poison Season songs. The instrument that you use to compose actually affects a lot of the chords you choose and the way you phrase things. In my mind, the new songs have a kind of simple, loping, straightforward quality, or kind of almost even an earnest quality. But I could be completely out to lunch with that as well—I generally have no idea what is going on in this music that I make until much, much after the fact.

When you’re songwriting, then, is it always the words that come first?

It used to be that I would have a bunch of chords that I’d enjoy strumming, then I’d open up my notebook and pull out the most melodious-sounding lines and stick them into a song and sing them. I kind of worked like that from the mid-90s until the mid-2000s. Somewhere in the late 2000s, I started coming up with songs where words and melodies kind of came to me at the same time; I would just record a bunch of voice memos and that would turn into a song.

I’m not sure—I think the new songs are kind of a mix of the two [methods]. I don’t really keep notebooks anymore. But in my head I was thinking that I would try and do music first and come up with words afterwards, that being the most normal way that I think most songwriters work. But for me that’s totally backwards, so it seemed like a good experiment. I did that for two or three songs, but generally it makes me distrust everything.

Could you say more about that distrust?

I’m always worried about crafting something so that all that you get is the craft or the technique of it, especially if you’ve done something long enough that it comes pretty easily to you. What I generally trust the most is just words and melodies that kind of just descend from on high all at once, that are just given to you. That’s what feels the best and feels the most natural, but it’s also the hardest to come by.

And where does your voice fit into all of this? You’ve said a bunch of different things about your singing voice over the years, and especially in a solo performance that’s something that really shines through. Where are you in your relationship with your voice right now?

I’m feeling pretty good about it these days [laughs]. Maybe it’s something that I’ve been self-conscious of in the past and I would just drink my way through it or something. Now I feel like I’m not forcing myself, but trying really hard to sing in a measured, quiet, even way—which is not the way that I sang for the first 15 years of doing this. I’m still getting the hang of it, but I feel like there’s something about restricting what I normally do with my voice that feels more intense to me.

The shows that I play as just me are quite quiet, and I just try to deliver the words and the notes as purely as I can. The band, especially the band that I’ve been touring with for the last five years that recorded Poison Season and toured that record last fall, by the end of that tour we were a ferociously loud, in your face, eight person beast. That is really different from the mindset that I have when I go into the studio to record a song, or sit down to write one even. So it’s cool: that seemed very specific to that group and being on stage with the band, but it’s something that would be completely alien to what I’m doing on this tour. It’s good—it forces me to sing in different ways, it pushes me into different corners.

On the cusp of recording what will be your eleventh album, do you feel like you’re avoiding complacency?

No, I think I’m being so thoughtless. I have no real preconceived ideas other than that I’m trying to play as much of the music myself as humanly possibly, because I haven’t really touched an instrument since 2007 [laughs]. I’ll come up with little parts, and maybe feed a part to the trumpet player who’ll do a variation on that, or a part to someone playing sax or flute, or someone playing an organ part. But it’s been a while since I’ve actually gotten my hands dirty. I’ve been playing music more regularly just myself the last few months and it feels good, so that’s going to be a part of the recording process. And I think I just want to come up with shit that I like and not think of grand, overarching concepts, or feel the need to exist in some kind of filmic, widescreen mode. That’s kind of been the Destroyer vibe for the last couple albums.

I don’t see my career. I mean I just don’t look at it, I don’t see myself in terms of one. I know that I’m 44 and I still manage to exist and support myself in the world though making records and playing concerts. But if you mean do I see the progression of one Destroyer album to the next as some kind of filmic style arc, the answer is no. I really see the records as individual things, especially because the circumstances change for each record—like different people playing on them. They change enough that each record feels like specific things unto themselves, each one. And I like that.

I’m also curious to know what you’re listening to, what you’re reading—what are things that other people are putting into the world that you’re into at the moment?

Or old things that you’re returning to!

Is outside inspiration something that you seek? Do you feel inspired by the work you see others doing or are you more in your own world taking things as they come to you?

No, I’m the exact opposite. I take deep, deep inspiration—necessary inspiration—from the world of film and music, and for a long time books. In fact, when things are too dry, when it feels like it’s been so long since I’ve encountered something that’s blown my mind, I feel a kind of mild depression and inertia. Those things are crucial.

I empathize with that so much.

Yeah, I don’t know if that’s the same with everyone, but for me that stuff—music and films and books—it’s just the air I breathe.